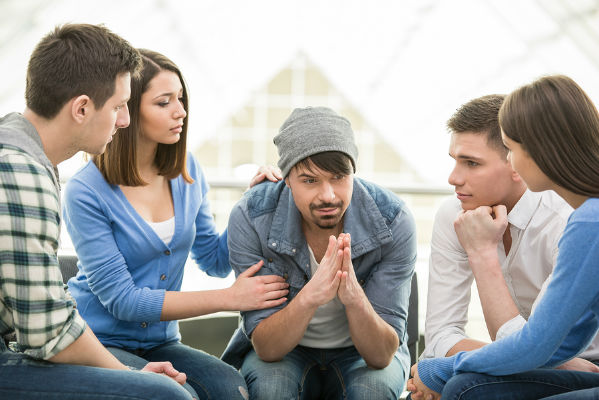 A relationship breakdown, losing a job or even the arrival of a baby, can rock men to the core, so much so a “shocking” number contemplate suicide, according to new research.

A five-country survey of more than 10,000 people found nearly half of the men, 46 per cent, who had been through a stressful life event during the past year reported suicidal thoughts or behaviours.

Professor Jane Burns from the University of Sydney, who led the research commissioned by the Movember Foundation, says men often cope in harmful ways that affect their health and wellbeing – making their life harder in the long run.

Of the men surveyed, 35 per cent responded to tough times by increasing alcohol, tobacco or drug consumption.

Just over 20 per cent said they became more aggressive and 27 per cent reported taking more risks.

“The statistics around male suicide rates are out there, we know also that one of the first triggers often times is a significant life moment or transition and some men don’t handle those moments well, but we didn’t know to what extent.”

“We’ve got to change our approach,” he said.

Mr Garone says it starts by reaching out to men, whether it’s in the workplace or the barber shop, rather than waiting for them to seek help.

It’s also about giving men the confidence to speak up about how their coping while preserving their masculinity.

“To burden your mates with taking your life is an absolute tragic outcome and the gravity of that pain is unbelievable and will sit with your mates forever,” Mr Garone said.

More than 190 pairs of shoes have been placed at Sydney’s Bondi Beach to represent each man who has taken their life in the past month.

The Movember Foundation laid out the shoes at dawn on Tuesday to remind Australia it “cannot bury its head in the sand” on men’s health.

“Until you spend a day in the shoes of someone who is suffering it’s impossible to appreciate the challenges they’re facing,” Rachelle Nicole, who lost a friend to suicide, said.

Men are encouraged to grow moustaches throughout November to raise awareness of prostate and testicular cancers as well as suicide.

* Readers seeking support and information about suicide prevention can contact Lifeline on 13 11 14 or the Suicide Call Back Service on 1300 659 467.

Readers seeking support and information about suicide prevention can contact Lifeline on 13 11 14.